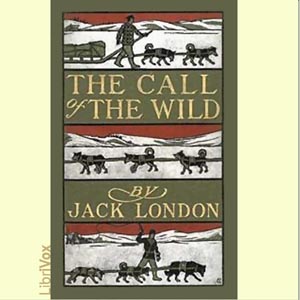 LibriVox recording of The Call of the Wild, by Jack London. Read by Mark F. Smith.

Buck is living a happy life in California until he is sold to pay a gambling debt. Taken to the Klondike to become a sled dog, Buck must toughen up and learn the harsher rules of survival in the North. One of the first of these is how to deal with being harnessed in the same team as a dog that wants to kill him.

Large, strong and smart, Buck toughens to his new life. But even the toughest dog can be worn down by constant work, and after 3,000 miles of pulling sleds, Buck nears the end of his rope.

Cast away as no longer useful, Buck is acquired by greenhorns whose inexperience nearly kills him, but after being saved by John Thornton, he at last finds a man he can love.

Then on a remote gold-hunting expedition, Buck hears a call emanating from the woods and speaking to the wild heart of his distant ancestors. The lure of it almost balances the great love he bears for Thornton, but events take him away from his old life... and into legend. (summary by Mark F. Smith)

Reviewer: EricJ - favoritefavoritefavoritefavoritefavorite - March 2, 2020
Subject: Only one word... Surperb!
I read this book years ago when I was 10 or 11 a fantastic book for a Boy Scout Tenderfoot to read. After many decades This compelling story has more meaning and emotional depth as reviewed from adult prospective. Equally superbly read by Mark Smith.

Reviewer: sarahm - favoritefavoritefavoritefavoritefavorite - September 13, 2014
Subject: Wonderful
Way back when I was ten or eleven, there was a time when The Call of the Wild was my favorite novel. I loved it so much that I gave copies to my sisters for Christmas. They were polite about it, as I recall. Listening to the story after so many (many) years, I wonder that it resonated at such a tender age. Then, I think the cruelties are understood in greater force when read as an adult. I suppose I took from it only what I was able to comprehend at that age.

As a child I was greatly touched by the compassion and love between man and dog, after the dog suffered so cruelly.

This is simple yet powerful storytelling. Yet London was also telling us about dog, domesticated over eons by humans and then flung back to his wild roots by humans turned savage by greed for gold. It certainly remains a powerfully-told story.

Reviewer: Big Ron C - favoritefavoritefavoritefavoritefavorite - October 19, 2010
Subject: Highly recommended.
Top-Notch reading job by Mark F. Smith. It's no surprise he was offered and accepted a chance to do a book professionally. (Which I learned from his blog page. Way to go Mark!!) His reading just flows beautifully with nice inflexions at all the right moments and it's all done so naturally with nothing forced. What a great book it is too, seeing the world through the dog's mind as he toils in the wilds during the gold rush. It doesn't get any better than this, folks!!!